The State Elections Enforcement Commission received a complaint on Wednesday (September 13) alleging use of public funds by Mayor Erin Stewart to promote her candidacy for re-election.

The brochure, giving tax and revenue information on the 2017-2018 municipal budget, also included statements promoting Stewart’s candidacy under her campaign slogan “Leading the Way” with information from Stewart’s campaign literature. Blogoslawski is also cited in the complaint for sending the brochure with the tax bills.

Shortell bases the complaint on state law (9-610) that bars an incumbent from using city resources “to mail or print flyers or other promotional materials” intended to advance a candidacy within “three months of an election”  and “prohibits any individual from authorizing the use of public funds during the 12 months preceding an election for any promotional campaign or advertisement that features the name, face or voice of a candidate. 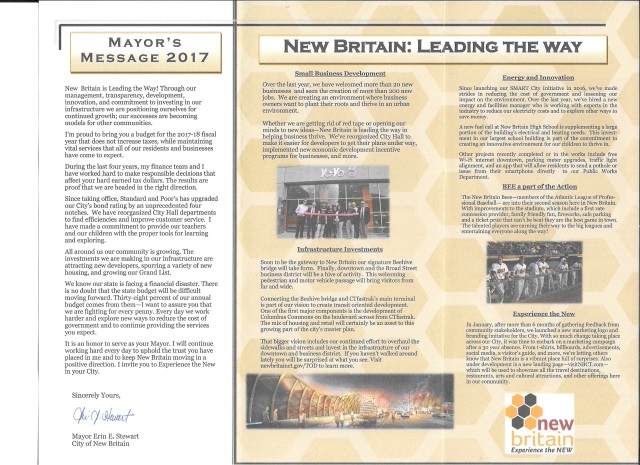 “No one questions the mayor’s responsibility to communicate with residents on matters of importance to the community throughout the term,” said Shortell. “But including an obvious campaign promotion in car tax bills within the 90-day prohibition pushes the incumbent advantage too far and is a violation. It crosses the line and creates an unfair advantage. The law expressly prohibits incumbents from doing what the Mayor and Tax Collector did.”

“We have also filed or are in the process of filing complaints about the mayor’s illegal use of City Hall and its resources, including video equipment for her sagging re-election campaign. In addition, we are filing a complaint about a large campaign billboard that has remained on Main Street for three years, with no campaign expenditure cited, an illegal campaign contribution amount to thousands of dollars,” Shortell added.

NB Politicus is a weblog featuring news and commentary on politics, government and community life in New Britain, CT. John McNamara - Editor and Writer
View all posts by nbpoliticus →
This entry was posted in Campaign Finance, City Hall, Money In Politics. Bookmark the permalink.