Citing a $2 million tax assistance agreement with the developers of the Costco Wholesale store on Hartford Road,  endorsed Democratic Mayoral  candidate John McNamara called on the Stewart administration to ensure that construction jobs at the building site be reserved for Connecticut construction workers and that construction on the site be in full compliance with Connecticut labor law.

“New Britain taxpayer assistance is subsidizing dozens of out-of-state workers in often unsafe circumstances, while Connecticut trades laborers are left out,” said McNamara in the wake of action by the Connecticut Department of Labor and ongoing trade union protests at the site.

Recently the Department of Labor  (DOL) issued a stop work order at Costco because one of the prime contractors failed to provide required Workers Compensation Insurance coverage for its non-union employees. Other employees were being denied salary protections required by Connecticut law. The Iron Workers Union and other trade unions are protesting the use of low-cost, poorly trained out-of-state workers who are on the job in unsafe conditions at the site. 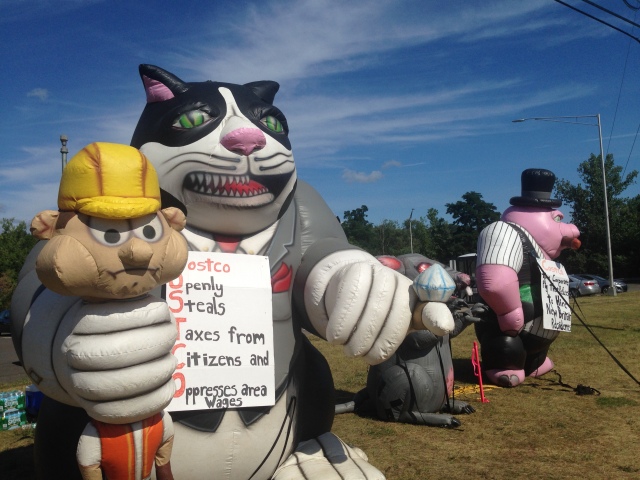 “New Britain taxpayers were told Costco would create jobs for Connecticut workers, but here we are, deep into the construction phase, and the parking lots are full of cars with out-of-state plates. Even Tilcon, a local major supplier of concrete, was not selected for inclusion on this project,”  McNamara said. “Bringing jobs and good wages to New Britain must be a priority with our unemployment rate well above the state as a whole.”

“I am disappointed that the developers building the store for Costco are ignoring fair wage and labor standards under the Stewart administration’s nose and no one at City Hall is paying attention. Tax assistance does not mean they’re allowed to do whatever they want.”

In an open letter, David Roche, President of the CT State Building and Construction Trades said that he has sat outside the Costco site with out of work residents and watched out-of-state workers drive onto the site and take dollars that should have been earned by members of local communities. Roche said “… local elected officials failed to demand the residents of their communities be hired during construction…” – something that should have been done in view of the tax abatements benefiting these companies.

Roche said, “I guess for some of the elected officials this is too much to ask; it seems like the only part of the construction phase of these projects they really care about is when the cameras are around. The times when they all get a gold shovel to break ground, or when the big red ribbon is up and they have the big scissors ready to open up.”

In August 2014, assurances were made by a representative of Northwest Atlantic, the real estate consultant for Costco, that fair wages would be part of the project when an 11th hour, $2 million abatement was rushed through at a special meeting of the City Council.

“Mayor Stewart should have pushed Costco developers to use local labor on this project – something a McNamara administration would guarantee on future projects..” said McNamara.  “The Stewart Administration dropped the ball on this, costing a hundred or more New Britain and Connecticut workers an opportunity to earn a good salary.”

NB Politicus is a weblog featuring news and commentary on politics, government and community life in New Britain, CT. John McNamara - Editor and Writer
View all posts by nbpoliticus →
This entry was posted in Costco, Labor rights, Minimum and Living Wages. Bookmark the permalink.