New Britain’s Common Council will consider a resolution in support of a $10.10 an hour ordinance this week at its Wednesday, March 12th meeting in the wake of President Obama’ March 5th visit for “raising the wage” and pending state and federal legislation to do the same.

The proposal being drafted and introduced by Council President Michael Trueworthy will call for New Britain to join other municipalities in the state which have adopted similar measures.

Last week the Mayor of New London signed a $10.1o policy for all municipal employees and independent contractors following a near unanimous vote by that city’s Council. While most municipal employees earn more than $10.10 per hour,  the city employs seasonal and temporary individuals who earn the current $8.70 minimum in delivering city services.  “This is long overdue,” New London Mayor Daryl Justin Finizio told the The Day of New London. “It’s a good step for our city, and hopefully, other municipalities throughout Connecticut will follow suit, hopefully the state will follow suit and hopefully the nation as well.”  The New London policy was approved by the Council 6 to 1.

New Britain’s  draft resolution stipulates that by the end of the Fiscal Year 2015-2016 municipal government will pay the $10.10 minimum to independent contractors and part- and full-time employees not covered by other agreements.

In his State of the Union address and again last week at CCSU in New Britain President Obama issued a “call to action” by employers and government to raise the minimum wage.

Committees including communication, finance and rules will also be organized.  The 47-member Town Committee will also form issue advocacy groups around education, jobs and the economy and the municipal budget.

The DTC will soon be selecting delegates to the state and congressional conventions to be held in May.  Interested persons may attend the meeting or contact the DTC.  A delegate selection meeting will be held later in the month.

Now, I want to be clear about this because sometimes in our debates with our friends on the other side of the political spectrum, this may not be clear, so let me just repeat it once again, as Americans, we understand that some folks are going to earn more than others.  We don’t resent success; we are thrilled with the opportunities that America affords.  Somebody goes out there, starts a business, invents a new product, provides a new service, that’s what drives our economy.  That’s why this free-market economy is the most dynamic on Earth.  We’re thrilled with that.  Everybody agrees on that.  But what we also believe is that nobody who works full-time should ever have to raise a family in poverty. That violates a basic sense of who we are.  And that’s why it’s time to give America a raise. It is time to give America a raise.  Now is the time.  Now is the time. 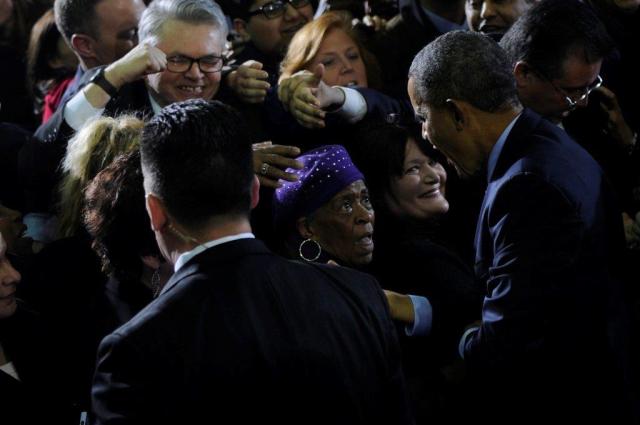 NB Politicus is a weblog featuring news and commentary on politics, government and community life in New Britain, CT. John McNamara - Editor and Writer
View all posts by nbpoliticus →
This entry was posted in Labor rights, Meeting/Event, Minimum and Living Wages, Obama. Bookmark the permalink.