Whither Roosevelt?  BOE Schedules Monday Vote On Re-Use Of East Side Middle School

The 10-member Board of Education (BOE) has scheduled a Monday 2/10 vote on a re-use of the Roosevelt Middle School on the city’s East Side following a public meeting  (Courant story) last week at which parents and residents questioned the plan.

Proposed for Roosevelt –the middle school for students who attend Chamberlain and Smith elementary schools  — are new uses,  including an alternative school-to-work program for high school students and temporary classes for Gaffney School students while that school across town is being renovated. 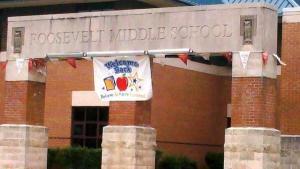 Democratic BOE member Aram Ayalon said the plan contradicts the neighborhood school philosophy adopted last year in his January 28th letter.  Stated Ayalon:  “The move will create two larger middle schools (Slade and Pulaski) of over 800 students  each where the facilities will be more crowded and there might be less individual attention to students, more discipline issues, and less services provided. This is especially important for early adolescents who need a stable and nurturing environment. Haven’t our students suffered enough movements last year?”

Republican BOE Member Nick Mercier countered in a January 30th letter: “Currently, Roosevelt has an enrollment of fewer than 500 students while Pulaski and Slade have roughly 500 and 700 students each. Depending on how the district lines are drawn Roosevelt could be closed and both Pulaski and Slade would still have fewer than 900 students each, well within the boundaries of what other successful districts have seen for middle school enrollment figures.”

Bowling for Democrats:  Join The Party At Bowl-A-Rama February 28th

The Democratic Town Committee will hold a 2014 kick-off fundraising event at Callahan’s Bowl-A-Rama in Newington on Friday evening February 28th from 6:30 to 9:30 P.M.

One of the invited celebrity guests

The bowling party includes a buffet (baked chicken, ziti, sausage & peppers, garden salad, meat platter, rolls and soda with a cash bar). Bowlers get two games and shoe rentals.  There’ll be recognition and prizes for top scorers and supporters. Contribution: $30 per person ($15 buffet only). Participating bowlers are invited to obtain pledge contributions for the town committee based on their bowling score.

May 6-27: Period for Party Endorsements at conventions including Governor/ Lt. Governor, Secretary of the State, Treasurer, Comptroller and Attorney General, Congress and multi town Legislative (State Senate, State Representative Districts 22 and 24) and Judge of Probate candidates.

May 20-27: Endorsements for State Representative Districts 25 and 26.

NB Politicus is a weblog featuring news and commentary on politics, government and community life in New Britain, CT. John McNamara - Editor and Writer
View all posts by nbpoliticus →
This entry was posted in Education, Weekend Update. Bookmark the permalink.