A community vigil for the students and educators lost at Sandy Hook Elementary School in Newtown has been called for 6 p.m. on Sunday, December 23rd at New Britain’s Central Park.

“Our children are precious, and I know everyone, especially parents, are heartsick for the little ones whose lives were taken today, and deeply sad for their parents and families,” Mayor O’Brien said in a statement announcing the vigil. “For my own part, I could only think powerfully of how much my little daughter means to me when I heard the terrible news – and I know all parents felt the same way. It is shocking, angering, tragic and terrible. I know that I speak for everyone in New Britain in expressing deep sadness for the victims – children, teachers and others – and heartfelt condolence and sympathy for their families, loved ones and friends – and for the people of the town of Newtown.”

State Senator Terry Gerratana, in a message to constituents, has provided a list of links and articles in the aftermath of Sandy Hook. “They include ways to navigate and assist as we all journey to a path of recovery.” 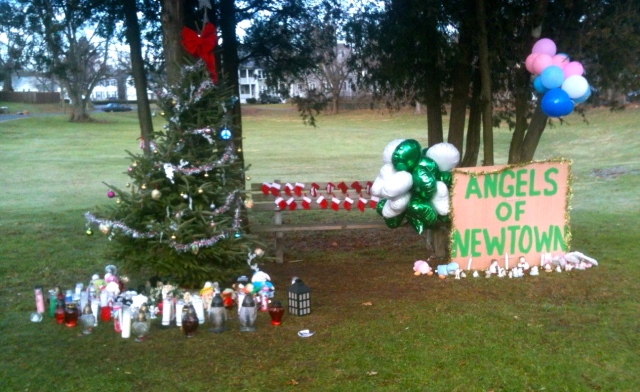 A memorial for victims of the Sandy Hook shootings at the “little” park, corner of Roxbury Road and Stanley Street.

Helping Young Children Deal with Violence in the News

Please submit by January 13, 2013 via the online nomination form or by regular mail to NBDTC Post Office Box 2112, New Britain, CT 06050. Nomination forms may be requested by emailing newbritaindemocrat@gmail.com.

Awardees will be recognized at the DTC’s 2nd Inaugural Party to be held January 22nd at The Whinstone Tavern, Stanley Golf Course.

The day after Barack Obama takes office for a second term the Democratic Town Committee on Tuesday, January 22nd will celebrate his inauguration and 2012 victories for Chris Murphy, Elizabeth Esty and the entire Democratic slate at a fundraising reception to kick off the 2013 municipal election year.

The event will be held at the Whinstone Tavern at Stanley Golf Course, 245 Hartford Road from 6 to 9 p.m.

DTC Distinguished Services Awards will be part of the program. Tickets are  $25 pp and will be available from DTC officers. Program ads welcome.  Information call the DTC at 860-505-8901 or email: newbritaindemocrat@gmail.com.

In conjunction with weeklong Inaugural festivities, a National Day of Service will be observed on Saturday, January 19th.  Activities in service to others in New Britain will be announced.

“The 2013 National Day of Service will take place on January 19th, two days before the President’s public swearing-in ceremony and Martin Luther King, Jr. Day. In urging Americans to take part in community service, the day will commemorate the memory and life’s work of Dr. King, Jr. In his “Drum Major Instinct” speech, the civil rights leader noted that while all might seek importance and distinction, true greatness is found in serving our neighbors, families, and friends. “That’s the new definition of greatness,” he said.”

America’s children seem to be shortchanged on almost every issue we face as a society. Not only are we failing to protect our children from deranged people wielding semi-automatic guns. We’re not protecting them from poverty. The rate of child poverty keeps rising – even faster than the rate of adult poverty. We now have the highest rate of child poverty in the developed world.

To make a contribution visit  https://newbritaindemocrat.org/contribute/

NOTICE: If you do not wish to receive updates from New Britain Democrats write “cancel” in the subject box and reply to newbritaindemocrat@gmail.com.

NB Politicus is a weblog featuring news and commentary on politics, government and community life in New Britain, CT. John McNamara - Editor and Writer
View all posts by nbpoliticus →
This entry was posted in Gun Violence, In Memoriam, Meeting/Event. Bookmark the permalink.